Blog - Latest News
You are here: Home1 / IT Insights2 / How Malware can Wreak Havoc on Your Jacksonville Business 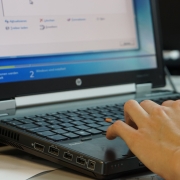 MALWARE HAS BEEN PLAGUING BUSINESSES FOR DECADES

Jacksonville Malware, short for “malicious software,” has been plaguing businesses and organizations for decades. And with each passing year, malware becomes more sophisticated and harder to stop, costing billions of dollars in damages. In fact, according to a study by Clark School at the University of Maryland, there’s a cyber attack every 39 seconds.

Using sophisticated software specifically written to harm and infect a device or network, malware often goes undetected before it’s too late. Mobile devices are being targeted more and more, which is particularly troublesome if you use your phone to help run your business, like most small business owners do.

Malware comes in many forms and can cause a varying degree of damage, from annoying symptoms to serious ones that can be crippling for Jacksonville business or organization.

If annoying ads, toolbars, websites and programs randomly pop-up on your computer screen or phone, it could be from a malware virus. This can often cause your computer to freeze, making a forced restart necessary. Pop-ups often come from visiting infected websites, installing free applications or answering surveys to win an alluring prize.

A lack of hard drive space is something you’ve probably had to deal with, especially at inconvenient times. While it’s quite common, a lack of hard drive space can actually be due to  malware filling up your drive with infected files and applications. If you find suspicious-looking files or applications that you don’t recognize or remember downloading, it’s best not to open or run them.

If your friends and family are receiving suspicious messages from “you,” you’re probably the victim of a particular malware called spyware. These sent messages can spread the malware to others and can cause harm to a business or organization’s reputation. Weak passwords and forgetting to log out of your accounts makes you an easier target for this kind of malware.

The “Blue Screen of Death,” BSOD for short, is when you computer screen turns blue and shows an error message. This can occur due to faulty hardware, but it can also be due to a computer virus. If your PC keep crashing, it could be that your computer is filled with corrupted files. This type of malware attack can affect entire networks and wreak havoc on businesses big and small.

Jacksonville Malware has been plaguing businesses for decades and continues to evolve and stay ahead of over-the-counter protection services. If you’re the victim of a cyber attack or want to protect yourself from hackers, you can count on the full-service support at Workforce IT of Jacksonville. Call us today for help!

Types of Ransomware and Why They Are So Dangerous