Blog - Latest News
You are here: Home1 / IT Insights2 / The Biggest Cyber Security Breaches of all Time 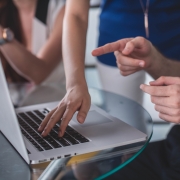 THE BIGGEST CYBER SECURITY BREACHES OF ALL TIME

What was once a nuisance, hacking has evolved into a very lucrative pastime. Each year, more and more money is lost because cyber criminals continue to change evolve their methods and malware to stay one step ahead of most cyber security. In fact, the U.S. Council of Economic Advisers estimates that cyber crime cost the U.S. economy between $57 billion and $109 billion in 2016 alone.

JACKSONVILLE MALWARE AND BEYOND

Cyber criminals are going after everyone, from small Jacksonville businesses to the largest corporations in the the world, leaving behind massive amounts of damage and chaos in their wake. To make matters worse, hostile governments are getting in on the act, using their superior resources to wage cyber war on corporations and countries alike.

To help you better understand the importance of protecting your Jacksonville business with the best cyber security and IT support, we’ve listed some of the biggest breaches of all time.

Hackers we were able to perpetrate the largest breach against a company’s computer network in history, affecting all 3 billion Yahoo! accounts. The hackers were able to steal user’s personal info, such as names, birth dates, phone numbers and passwords. They even obtained the security questions and answers and backup emails used to retrieve and reset lost passwords.

Marriott International announced in 2018 that cyber criminals had been stealing their guests’ data since 2014. Contact info was stolen across the board, while others also had their passport numbers stolen. Additionally, Marriott International believes 100 million guests had their credit card numbers and expiration dates stolen. The breach was attributed to a Chinese intelligence group.

All 145 million of eBay’s users were attacked by hackers in 2014. The hackers breached the company’s network by using the credentials of three corporate employees, giving them complete internal access for 229 days. Users had their personal info stolen, including names, addresses, dates of birth and passwords.

Because of a weakness on the Equifax website, hackers were able to breach its security and steal personal info from 143 million consumers, including addresses, social security numbers and even some drivers’ license numbers. 209,000 consumers also had their credit card info stolen.

It only took two hackers to breach the transportation giant and cause complete chaos and damage Uber’s reputation. They were able to break into the app and steal names, email addresses and phone numbers of 57 million users, including the drivers’ license numbers of 600,000 Uber drivers. Uber paid a ransom of $100,000 to have the stolen data destroyed, without any assurance from the hackers.

If cyber criminals can hack into international companies with huge resources for cyber security, image how easy it can be if they target your Jacksonville business. You need the best cyber security and IT support around. Workforce IT of Jacksonville has both the remote and on-site IT services to remove Jacksonville malware and protect you from future attacks. Call Workforce IT today to secure your business’ future 904.638.8406.

Types of Phishing emails your Jacksonville Business should look out for

The Importance of 2FA
Scroll to top